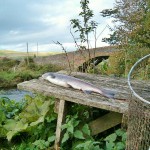 This guide to fishing the River Stinchar is not intended for the experienced angler or the angler with a good knowledge of the river. Nor is it intended to instruct anglers on the art of fishing.

No man knows it all. Fishing is not an exact science and we have all had numerous blank days to prove it.

However, the visiting angler, experienced or otherwise, may find the following information useful in his quest for the king of fish on the Stinchar.

The river is 54 kilometers long, and rises in Shallochhill, in the Carrick Forrest, then runs through the beautiful Stinchar valley and the villages of Barr, Pinwherry, Colmonell and into the sea at Ballantrae. It has two main tributaries, the Duisk and the Assel. The Duisk rises in a more southerly catchment and is sometimes in spate when the Stinchar proper, upstream of Pinwherry, is flowing at normal level.

The best months to fish the Stinchar are September and October. However, a wet Spring and/or Summer can produce good sport in the early months, particularly June, when a few good double figure fish are to be found in the river.

The upper beats fish well during spate conditions, though the fish tend to come later in the season and sport is limited due to the lack of sustained water.

In 2004 we saw a return to the “Good old days” when after a wet spring and summer, large numbers of fish returned to the river giving good sport throughout the season.

Even during the month of October a large number of grilse, fresh run, and sea-liced were to be found in the river.

The average size of the Stinchar salmon is not large, being between 8-12 lbs, though good double figure fish are taken regularly and fish of 20 lbs plus are not unknown.

The dedicated angler should be prepared to be on the river at all hours when the conditions are right, early or late, and miss no chances.

The sea trout and herling stocks have been decimated in recent years and have been almost non-existent. However they are slowly returning, and the policy of returning all of these fish to the river can only help.