After nearly 3 weeks of low water the river has burst back to life with
lots of water this week, too much at times. Three afternoons then Saturday
were all lost with high water.

Ballantrae Bridge had 22 for the week.

Kirkhill has fished well with a good number this week inc a fish over 20lb
caught by Gilbert Browne. They also had one around 13lb, both fish released.
Tom Wallace had a few and Owen Samson had 3 grilse one morning.

Dalreoch had 22 for the week – Johnny Gaff with 5 one day up on Almont, he
also lost a big fish after it went right down into the Smiddy after hooking
it in the Rock pool.

Laggansarroch has fished well this week with Rab Moffat with one & Doug
Wyllie with 3, all grilse.

The river is at 4ft tonight ( 12th Sep ) and provided we get no more rain
the prospects look very good for the next few days. 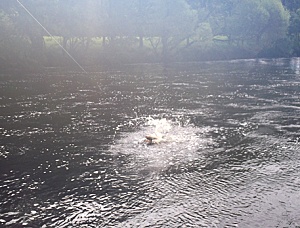 A lively grilse at Balnowlart on Sat 13th Aug 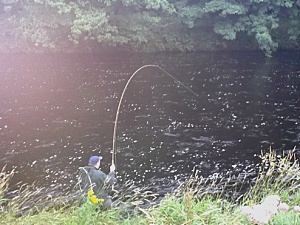 Kenny Hyslop into a grilse on Balnowlart 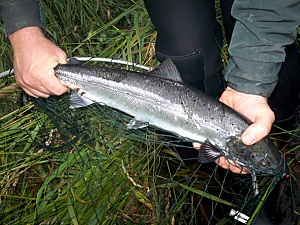 Ballantrae Bridge
Robin Mulholland and his party are the tenants in early Aug. Last week
during the low water they had 7. This week beginning the 8th they have had
23 mostly grilse with 5 between 11 & 18lbs.

Balnowlart
I haven’t managed to find out how all the different members of the syndicate
got on this week but got some news – Andy Ewan had a 4lb grilse from the
Battery, Kenny Gibson had one of 12lb from the Garden Seat, Ian Erskine 12lb
on the Corner Pool. On Sat Gordon Hyslop had 3 from the Big Flats best 9lb,
Jimmy Hyslop 6lb from the Corner Pool, and Kenny Hyslop went down for an
hour after his father finished and got a brace of sea-liced 4lb grilse.

Knockdolian had its best week so far with 33.
Tony Coughlan & Brian Wilson had a fantastic day on Twins & Bankweil landing
13 between them. On Fri 12th John Hall had a 5lb fish from Kinning Park, &
Lord John had a 12lb from Laigh Haugh.
Mr Cairns & David had 3 from MacCallums & Gordon Hyslop had a 9lb from
Shakiston.
Sat 13th – Lord Richard had 3 from Twins & B’weil, Brian Shaw 12lb Matthews,
Peter Bradshaw went to Dalni for a couple of hours after Mr Cairns left and
caught and returned 5 fish best around 14lbs.

Colmonell Angling Club had 8 between Thurs – Sat, best of which a
12lb to George Falls & young Craig Walker had a 6lb fish from Ministers as
did Robert McIlwraith.

Kirkhill is being well fished but I couldn’t get hold of Gilbert.
Owen Samson had one out the Dub on Friday.

Dalreoch & Almont – Monday 8th
Alan Scott had 2 from the Battery 10 & 11lb. On Thurs Archie Bryden had 2
from Dangart & 1 from the Craig – 8, 10 & 11lb respectively. There was a
fish of 6lb from Almont Hut pool for Mr Wood.
On Fri Billy Morrison had 2 from the Laird’s Run 10 & 12lb, John Cathcart
10lb from Dangart, John McCulloch had 3 from Hare’s Took, best of which was
13lb. Stewart Swinton 12lb on Hut Pool & John Cairney had a 9lb fish on
Hare’s Took also.
Stuart Houston had an 11lb fish from the Craig, Jimmy Horne 7lb Hut pool.
There were also 2 more of 13lb and 9lb I don’t have names for.

Hallowchapel another big fish for Tom Lothian this time 14lb on
Tues 9th.
Sat 13th – Jock Cree had 3 from the Meetings.

Laggansarroch
Charles Coltman had 2 sea-trout and a fish of 7lb (all returned) at Burnfoot.

While fishing at the bottom of Balnowlart on Saturday I saw a lot of
grilse running in straight from the sea. We caught a few of these and they
were in great condition covered in sea-lice. With the good number of 2SW
fish already in the river and now with the arrival of the grilse , expect to
read about some bumper catches here if we keep getting some decent water.

Sat 16th July – the river lifted a foot albeit very dirty with the only
success I heard of was up on Laggansarroch, where Doug Wyllie landed and
returned three nice sea trout just before the darkening.

More rain on Sunday had the river in good condition however it poured all
day on Monday spoiling what looked like being a great day on Monday.

Tuesday was perfect water. Robert Dalrymple down on the Ballantrae beat
got their first fish of the season from Diana’s; a sea-liced 8.5lb fish
which was returned. Balnowlart had three. Hugh McLatchie a fish of 13lbs
from the Corner on a rapala. Gordon Hyslop, one from the Tig Pool, approx
10lbs on a red tube and one for Steven Holliday, 7lbs from the Garden Seat.

Kirkholm has been very lightly fished this season and are counting three,
the best of which was around 10lbs to Willie Marshall.

On Knockdolian Brian Wilson had two 10lb fish from Bankweil – both
returned. Colin O’Dele lost three salmon and caught a 1.5lb sea trout an
Archie Mitchell & John Hall both lost three fish each. Colmonell Club water
didn’t land any, however Les Howarth lost a good fish after having it on for
a while.

Up on Kirkhill, Tom Wallace had a good fish of 13lbs while Ross McCulloch
lost a big fish on a monkey just above Colmonell Bridge. On the opposite
side at Bardrochat, Alec McGhee had a 8lb fish out of the Bridge Pool while
Alan Scott had a 12lb fish out the Dub.

Tom Lothian had another 12lb fish from Hallowchapel – this new rod of his
certainly doing the business.

As I write the river is getting very low again and only a very few sea
trout anglers are on the river.

After rain all day and night of June 17th the Stinchar was a raging
torrent more than 6ft and on Sat 18th more rain in the morning just kept it
at that height, only losing a foot by darkening.

Balnowlart had a fish on moon (no details), Knockdolian had a fish around
9lb off Dalni by syndicate member Brian Shaw on his Stinchar flamethrower.

Up on Bardrochat Garry Burden landed a 9lb fish on a rapala, keeper John
Goodenough lost a good fish in the same pool.

Across the water Davy Conner (registered blind) who was being guided by a
friend landed a fish around 7lb while spinning in Rory’s on Kirkhill. Well
done DC.

Jonny Gaff had a 9lb fish off Almont.

Tuesday the river lifted 4in and Garry Burden had another 1 this time off
the club water below Colmonell bridge – it weighed 11lb.

Wm Blane and Steven Holiday were both in the action at Balnowlart with
fish of 12lb and 7lb.

Archie Mitchell and John Hall were on Twins & Bankweil and had decided to
pack up around 3pm as they hadn’t seen anything all day when they noticed
the river had came up. Archie had his rod taken down when John got a fish –
they then fished on and finished the day with three (13, 8 & 7lb).

Wednesday saw three more from Knockdolian one from Macallum’s and two
from the Blackstone at the House pools for Lord Richard, one about 8 or 9lb
and another he said looked like a fish of 13lb but felt more like 15lb it
was so solid.

Dalreoch had one from the Craig 9lb.

Hallowchapel had two a 12lb fish for Tom Lothian on his new rod & reel
and a 9lb fish for Colin Liddle.

Eddie Smith had two, both 9lb from the Isles at Minuntion.

Young Daniel Conon had two from the Pot in the village of Barr 9lb &
10lb.

Thursday I was on Dalni & Scaur and played a good strong fish in the
Scaur for a while before we parted company. I then landed a big hen approx
18lb in Dalni which swam away none the worse for our meeting. Interestingly
that fish had only a touch of silver left on her, I reckon she has been in
the river from early April. Unfortunately my camera choose the wrong night
to decide not to work and the phone was on the charger. Home, and onto
Amazon and now in possession of a nice new little Kodak which is totally
waterproof, in fact can take underwater pics so hopefully no more missed
opportunities.

Friday saw the water getting low again but after overnight rain the river
rose a few inches on Saturday.

The only fish I know about on Saturday was two from Balnowlart, a 7lb to
George Falls on a silver toby & an 11lb fish from Watson’s for myself on a
little gold bodied willie gunn half in tube. 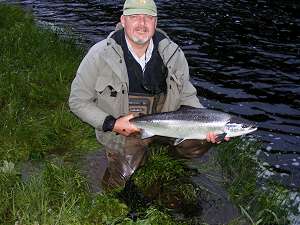 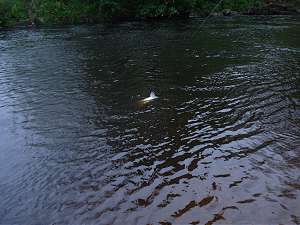 Gordon on Knockdolian –
Beginning to tire 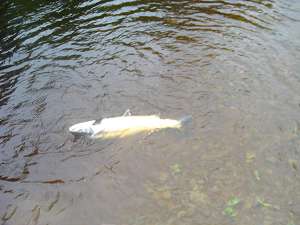 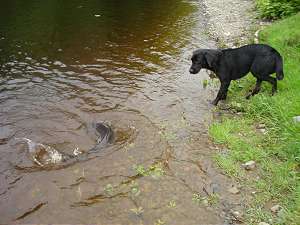 Nearly there – Rory not sure what to make of it 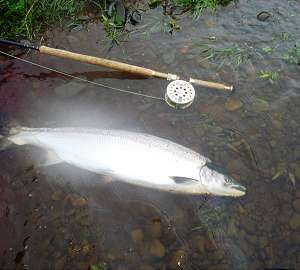 What a cracker – about 16lb

26th May
News coming thick and fast! – Brian Shaw got a spanking new fish – 12lbs –
on McCallum tonight. Also Kirkhill had another two a 12lb’der yesterday and
an 8.5lb ‘der today.

Another one today – caught by myself on Knockdolian on Dalnie Pruin on a
Stinchar Stoats Tail size 8. The fish weighed around 16lbs. Unfortunately it
was deeply hooked and bleeding and had to be killed. I then handed the fish
into the estate for them to decide what they do with it as I hate having to
kill big fish, especially springers.

24th May
Owen Savage fishing Kirkhill’s Dubanee landed and returned a fish around the
15lbs mark on a rapalla on Tuesday 24th May.

18th May
Kirkhill had the 1st salmon of the season on wed 18th May. It was caught at
Colmonell bridge by Bruce Hamilton on a spinner. The fish was around 6 or 7
lb and was returned.

All the best,
Gordon