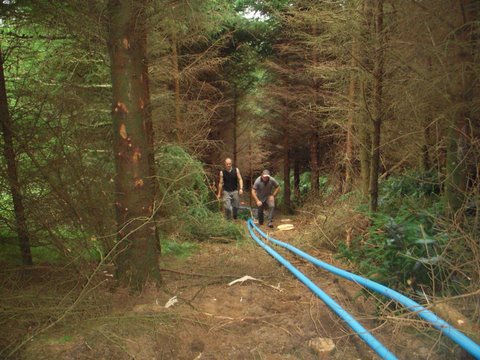 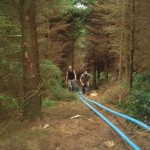 Brood stock are caught in November and early December, hens out number the cocks, by three to one. These fish are held in separate tanks, until the females come into season. The fish are then stripped and the eggs fertilised by two different cocks, to ensure fertilisation. The females are then placed in a recovery tank and when strong enough are returned to the river. The Cocks however are retained to continue their good work until all the brood stock has been covered. The fertilised eggs then lie in trays with a carefully regulated flow of water passing over them.

Each day the hatchery manager, Derek McWilliam, checks these eggs, removing any addled or irregular ones from the many thousands that are being cared for. Once the water temperature begins to rise in the spring of the following year, the young fish begin to incubate. It is these fry that are returned to the river.

They go mostly to restock traditional spawning burns that have been denuded of life as a result of out dated forestry practices. Sixty square miles of the Upper Stinchar catchments have been planted by the Forestry Commission over the last fifty years. A considerable amount of the forest is now being felled. Applying the new planting rules, regarding water courses, there is now plenty of opportunity to restock these depredated areas.