Finally the rains stopped and very slowly the river dropped by the
beginning of December so we got started catching up fish for the hatchery.
We had no problem getting fish – the only thing was the cocks were
out-numbering the hens by about 3-1 in some parts of the river. The quality
of the fish was amazing with a lot of good sized fish in the pools with a
good few well over 20lbs.

The second night we were out we found hens no bother in fact in one pool
not all that large there were 18 fish in it. We also noticed a few redds had
already been cut and indeed a few had spawned. The fish we took back to the
hatchery were all stripped within 2 days and returned to the river. So now
we have all the trays full and the hatchery running to full capacity. (not
sure of exact numbers).

As I write this report on December 31st the river is very low and snow
and severe frosts dominate.

On the Ballantrae beat the high water of August proved very difficult for
the rods as fish didn’t hang about. The average was around 5 or 6 fish a
week which is very low for this usually productive time. September arrived
and apart from the first week, the river remained low for the month, only
breaking on the last day. The total for 2009 was 76 fish although a very
notable 40% of these were salmon. Robert tells me they only had one fish
over 10lbs last year.

Balnowlart rods have had a mixed season; some rods, myself included along
with Stuart Laing have had a good season whilst some anglers have really
struggled. Bobby Gardiner fishing early October had a great day landing 5
salmon including a 22.5lbs fish.

Kirkholm did quite well in October with a good few fish including a 21lb
fish on Wednesday 28th October.

Knockdolian had 60 for October compared to 73 last year bringing their total
for the season to 153 – eight down on last year. Biggest caught, 17lb by
Bill Sevoir on October 5th. 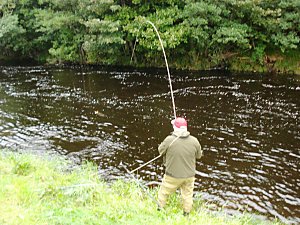 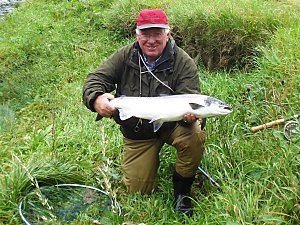 Colmonell Angling Club didn’t have a particularly good season, well down on
last year. I have no figures for Bardrochat or Dalreoch but on Almont Johnny
Gaff had 6 one day then on October 28th Kenny Hyslop & a few friends had 7
between them (all returned) – best of which around 11lbs.

Up on Hallowchapel anglers did well and reported seeing a lot of fish going
through. 2 big fish were hooked but lost during October.

Up on the Wee Stinchar on Coltman’s water, Phil Houghton had a few including
one estimated at around 24lbs (returned).

Minuntion beat has seen a lot of fish and John Scobie landed a beauty of
19.5lbs on Oct 27th.

Nether Barr had a fish of 16.5lbs returned by Geordie Campbell.

The Stinchar’s largest fish for a good number of years, a 30lb cock caught
by Alan Stevenson from Dalmellington at Pinvalley approx 5 miles above Barr
Village. Alan took the fish on a flying c and led him a merry dance finally
landing the brute downstream on neighbouring Knockeen.

According to the reports I’ve had, there seems to be a large number of fish
in the upper reaches this year with a high percentage of the fish being
salmon and not so many grilse in the mix.

We will shortly be going out in the Upper Stinchar to catch up Salmon for
the hatchery. I will try to keep you all informed what we find once we get
started. Please remember if you have any news/photos to email them to me at
wmhyslopandsons@fsmail.net. 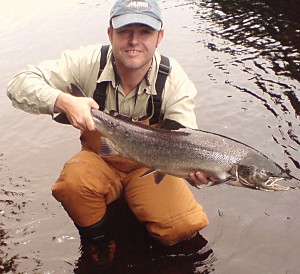 Stuart with a 14 pounder at Balnowlart

Robert Dalrymple tells me his tenants at Ballantrae Bridge are having a
difficult time with the constant high water, only averaging five or six fish
a week, although this last week in August they had nine and there was
noticeably more fish about.

On Balnowlart it’s a similar story with fish not keen to hang around.
Some of the syndicate members who have fished here for many years find it
very unusual to blank in these conditions but quite a few have gone home
without a pull. However there are fish going through and those who keep at
it can be rewarded with some good quality fish. Andy Ewing has had a few,
best of which was twelve pounds. Stuart Lang has had a good few including
three between twelve and fourteen pounds.

Kirkholm has been very lightly fished and have only half a dozen in the
book so far. 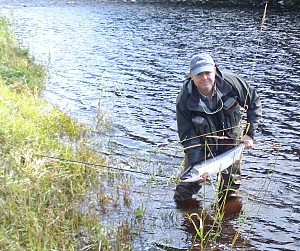 Up in Knockdolian there have been a few good catches despite it also
being very lightly fished. Hugh McLatchie had a ten pound fish and five
grilse off Dalnie & Scaur. Regulars Tony and Brian Wilson had seven fish off
Twins and Bankweil best of which was twelve pounds. Other successful rods
were Mr Edwards, J Hyslop, A Cowan, G Hamilton. This week Paul Smith fishing
the first of his two weeks finished with six fish and lost quite a few more
including a monster on Sallochan after a lengthy battle. I had a fantastic
evening fishing Shakieston on Thurs 27th Aug during squally showers. I
caught the river just before it rose, hooking and losing my first fish then
landing four and a sea trout (best around twelve pounds), returned the sea
trout and two salmon. 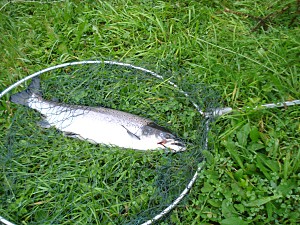 On Kirkhill Gilbert Brown tells me his guests have been getting the odd
fish but hopes things pick up next month.

Almont, Dalreoch and Bardrochat has been relatively lightly fished during
August but have certainly been getting a few (best an eighteen pound fish
from the Bridge Pool on a nine foot trout rod by keeper Paul Mottram).

Hallowchapel has had a good few including three in one afternoon for
Bailiff Tom Lothian and a fourteen pound fish for young Robert McIlwraith
which was his first fish on the fly.

Up on the Wee Stinchar Doug Wyllie has had a couple at Laggansarroch as
has Phil Haughton.

On Minuntion, Johnny Warrender was out for a few evenings and had a fish
most nights.

All in all there seems to be a reasonable run spread throughout the
river. Ninety per cent of these fish are spanking fresh and whilst most
anglers keep a few it is encouraging to see so many being returned.

On another matter completely, the roads dept employed a company to paint
the Jubilee Bridge at Pinwherry. The company erected a scaffold on both
sides of the bridge to which the river board expressed concern at the time
of year to sanction such work. On Sat 15th Aug a massive flood brought down
a huge tree which smashed into the structure and buckled it actually
creating a dam. When the river dropped a bit the company did try to
dismantle but the rain never stopped and another huge flood on Thurs 21st
broke the whole lot free and washed it down the river for approx 100 metres.
Andrew Cowan who was in residence at Hallowchapel at the time captured the
whole event on video and it was he who informed the river board. Thankfully
it jammed in the tail of the Jubilee Bridge Pool before reaching
Hallowchapel. By the following Monday with the river dropped a few feet the
river board contacted the roads dept and informed them this had to be
removed from the river immediately as heavy rain was moving in on Wed and
expected to last for remainder of week. I offered the services of an
excavator on the Tuesday and thankfully along with two scaffolders we
managed to drag it all out and dismantle it before it did any real damage –
so well done to the members of the board for preventing a potential
disaster. 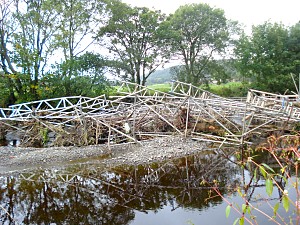 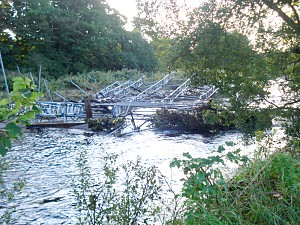 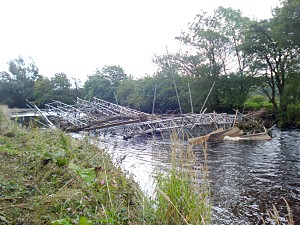 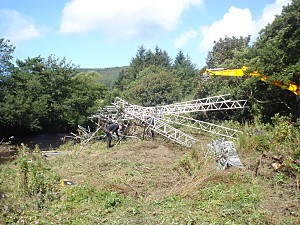 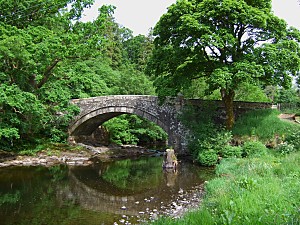 The Balnowlart syndicate water saw the first fish of the season landed on
the 14th. It was a cracking 12lb fish. No doubt there would have been others
like this landed elsewhere on the Stinchar.

On the Ballantrae Beat,
despite plenty of water in July there was a definite scarcity of fish. We
managed to catch 1 small salmon and a 2lb sea trout. There seem to be a lot
of hurling around in the 8oz to 1 lb bracket – a lot more than we have seen
for many years.

We look forward to grilse run in August.