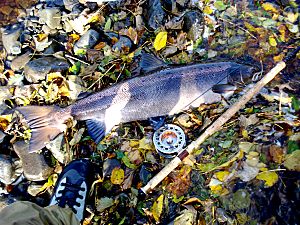 By mid September some really big fish moved into the river and fairly
spiced things up. I am sure no one was complaining about catching lovely
fresh fish even though the majority of them were below 8lbs and even more
around 5lbs, but the arrival of these two-sea wintered fish really provided
anglers with terrific sport.

At Ballantrae Bridge, Robert Dalrymple tells me they were around 20% down on
last year, obviously the constant high water not suiting this beat. Also
quite astonishingly, he tells me they only had two fish over 10lbs. All in
all a fairly enjoyable season.

Upstream on Balnowlart the syndicate rods
had three of these big fish (all returned). The biggest was caught on a
cascade by Hugh McLatchie – this fish measured 42 inches long and estimated
between 26/27lbs.

Kenny Gibson had an 18/19lbs hen fish on a tiger rapala and
Gordon Hyslop had a wonderful day on the 17th Oct landing three fish
including a 37 inch, 9 inches deep, estimated around 20lbs on a red
tube fly on the Tig pool. 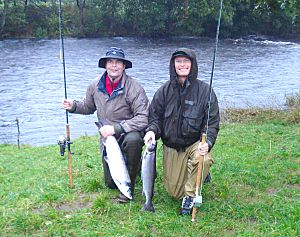 Martin & Verner, from Switzerland at Kirkholm 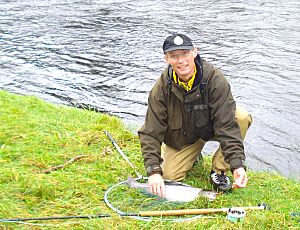 Martin just after he landed his first ever salmon

The high water suited Kirkholm and they did very well in the last few weeks with
some very good days. I was asked by the owners of Glenapp Castle to organise
fishing for two Swiss guests who had won a curling competition in
Switzerland. Their prize was to come to Scotland & curl but while here the
guys wished to fish for Salmon.

Kirkholm was booked for Oct 8th and after a
ten foot flood on the 6th, the water was perfect. I was to look after Martin
who wanted to fly fish & I recruited the very able Kenny Gibson to look
after Verner (a beginner) who would spin.

Martin looked rather alarmed at
the 14ft fly rod I provided him with saying it was very long compared to
what he was used to but after a quick lesson it was heartening to see him
grasp the basics & by lunchtime he was putting out a nice line. Just after lunch he hooked and landed a lively little fish of 6lbs.

Kenny had his man
in the action after only an hour when he landed a beauty of a fish around
10lbs. Verner then hooked another five fish on the rapala but landed only
one more around 12/13lbs (a hen fish, full of eggs – which was duly
released).

All in all a very enjoyable day for all concerned and I get the
feeling they’ll return.

Knockdolian was booked solid from mid September, right through the season
with some good catches being made. I enclose an email I received from John
Cairney about a red letter day:

“Hi Gordon
Fished Knockdolian on the 2nd October on a falling and clearing river (Bankwheel
and Twins). This being only my second visit to the Stinchar and Knockdolian
in particular I was extremely grateful to Mr Peter Bradshaw who spent time
with me and advised on tactics fly’s etc for what was to turn out to be my
best Salmon fishing day ever. During the course of the morning alone I
hooked four fish, lost one, returned two and kept one due to it being so
deeply hooked. Included in this number was my heaviest Salmon to date, a
fresh hen fish of fourteen and a half pounds that was safely returned after
a tremendous fight. Sport continued in the afternoon with me landing and
returning a further two fish and losing a third after playing the fish for
some fifteen minutes it decided it was returning to the sea without me, a
fish that I saw close to the bank and would estimate to be in the high
double figures. All in all a day never to be forgotten and it goes without
saying that I cannot wait to return.

Up on Colmonell club water, bailiff Robert McIlwraith has had a fantastic
season landing close on twenty salmon on the fly with the vast majority
being returned. On Monday 28th Oct, Craig Hastings hooked a fish on his
second cast at the bridge, he had it on for nearly an hour and was just just
bringing it to the bank when it started thrashing on the surface and broke
him. I witnessed the fish on the surface and it was certainly well over
20lbs. The young Walker boys from Craigneil Farm both had their first salmon
this season. Stuart with a lovely 8lb fish in August & his younger brother
Craig with one in October around 13lb which was a red hen & was photographed
& returned. Well Done Lads!!

On Kirkhill, Gilbert Browne tells me he’s had a very busy season with a lot
of anglers fishing his water and doing very well. A lot of quality fish in
double figures with most of them being returned. Similar story at Bardrochat,
Dalreoch & Almont. Paul Mottram tells me his two young sons went down to
fish one night and seven yr old Harvey returned with a beauty of 11.5lbs.
Here they have also seen a few big fish, two around 25lbs and again I
enclose an email from another happy angler: 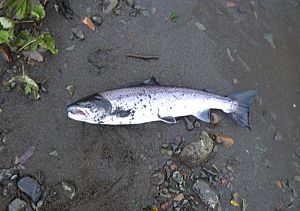 One of the Carney party beaching a fish at Dalreoch

“The Carney party had the week commencing 6th Oct on Dalreoch. Managed 2
days fishing out of the 6 due to the huge spates of the 7th and 9th.

Finally up at Hallowchapel, Bill Monks party had a terrific week
including an 18 pounder – these guys take a few for the pot but the majority
are returned. They also had a fish in October well over 20lbs. I’m afraid I
don’t have much info the further up the river we go apart from Minuntion
where Johnny Warrender landed a 19lbs fish. I also had a report of two
anglers landing eleven fish in one day up at Knockeen (approx 3 miles above
Barr).

Thanks to all who took the time to email and send photos – much appreciated.
And lastly just to inform Colin & Horace who fished Knockdolian on the last
week that I’ve found their landing net & I’ll make sure you get it next
year!!

Out of August & into September and no let up of the rain. Good numbers of
fish are being caught all throughout the length of the river. The majority
of these are in the 5 – 6lb class, spanking fresh. These are the fish we
used to get in mid July but now seem to arrive 4 – 6 weeks later. There has
been the odd big fish encountered during August but not many; however
yesterday (Sept 15th) Knockdolian had fish of 20lb & 15lb.

Today on Balnowlart Stuart Laing had a brief encounter with a fish well
into the teens, then a few hours later Jimmy Blane lost a huge fish after a
long dour struggle. The fish was nearly beat and on its side when the Toby
parted company. Jimmy was with his brother Willie during the tussle and they
both put the fish in the high teens or more.

Robert Dalrymple tells me they were counting 65 fish to the end of August
at Ballantrae, compared to 90 last year, obviously the high water not
encouraging them to hang around.

Balnowlart rods have had good sport with the grilse with the odd better
fish among them. Jim Gruggan had a nice one at 12lb and on his next visit he
hooked another good fish only for it to disappear with the fly, leader and
the braided loop he had attached the previous evening. (suggest a dab of
superglue next time Jim).

Knockdolian had 40 fish up to the beginning of September but I am sure
this figure could have been trebled had it been fished more. There is no
better month than August to fish the Stinchar if it gets water.

On the club water at Colmonell best fish fell to Sandy Wilson 12lb which
he returned. A first salmon for Stuart Walker (8lb )on a rapala.

Kirkhill seemed to be well fished with most rods being successful.

Anglers coming to the Stinchar can now access river levels at

www.fishayrshire.co.uk where it shows the Stinchar at Ballantrae. This
is a SEPA station at Balnowlart and is updated twice daily. For those of you
familiar with the marker on Colmonell bridge the SEPA gauge is one foot
lower. ie. 2ft on SEPA is 3ft on Colmonell bridge. Hope you find this
useful.

Finally any angler who would like to contribute to the site can inform me
of catches and can include photos by e-mail or mobile.

At Balnowlart the syndicate rods were mostly getting a fish each but
no great catches recorded – although it must be said the quality of the
fish was exceptional, with a good number of double figure fish covered
in sea-lice. Kirkholm said they had a fish most days but felt it was
dour for the time of year. Best so far was a sea-liced 13 pounder by
Kenny Gibson. Knockdolian is suffering from a lack of anglers. Mr
Edwards fishing the Twins and Bankweil on Monday 11th August had a great
day landing 6 fish up to 14lb – 5 of these were returned.

The Club Water has had a few but on Saturday the 2nd August, in a perfect
water, 10 anglers never seen or touched a fish, while 500yds up the river on
the Kirkhill beat Gilbert Brown fishing by himself told me he had his best
day ever – landing and releasing 9 salmon.

On Bardrochat, Dalreoch and Almont stretches Paul Mottram told me since
the last week of July, they had 16 salmon up to 12lbs and 4 grilse but he
too is lamenting about the lack of anglers. Hallowchapel has also been very
lightly fished with only a couple caught. Up on the Wee Stinchar Phil
Haughton landed 3 fish of 9, 10 and 12lbs on August 8th. I have an e-report
of a fish caught on the Nether Barr stretch right at the top of the river.

I fished Balnowlart all day yesterday (16th August) and there were a lot
of fish coming in. I landed 2 nice fish around 8 1/2 and 6 1/2lbs and a
smaller grilse around 3 1/2lb. The forecast for the coming week remains
unsettled and I believe the Stinchar is the place to be as long as we keep
getting the water.

Above Colmonell David Bover fishing the Kirkhill Fishings had
a fish of 11-12lbs on the fly, which he returned. Dalreoch had a fish of
12lb caught by J McConway from the Smiddy on the fly and apart from a small
number of sea trout caught and returned it has to be said everyone gets the
feeling that there is not a lot of fish about yet.

Here’s hoping they come
in more numbers on the next spate. (G Hyslop).