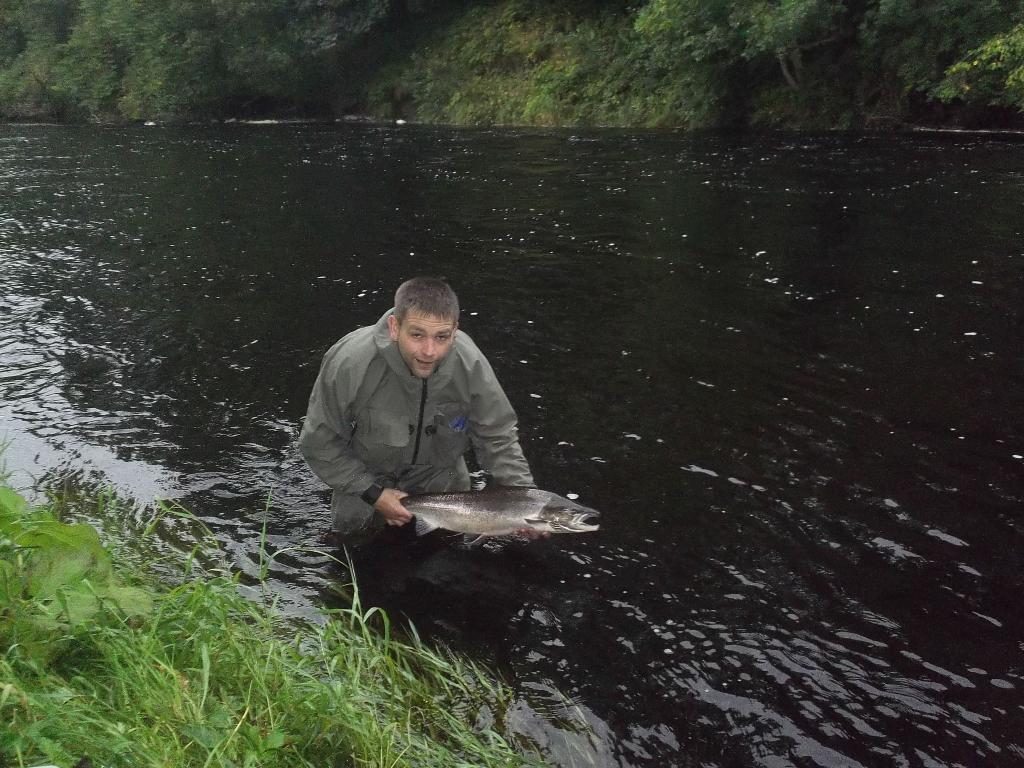 The season ended on the 31st October on Stinchar, and like last season, for the majority of the beats, most were pleased to see the end. I found it quite amusing on the last day as I drove to work over Colmonell Bridge. No cars to be seen, all the desperadoes who are usually there at first light had had enough, even with the water sitting at 3ft and free of leaves.
It has been a poor season compared to recent years. Some thought last year was poor, but the total was in keeping with the ten year average. This one is going to be well down.
The lower beats really suffered, the normally prolific Ballantrae Bridge and Balnowlart beats had a terrible season as did Kirkholm. Knockdolian were 50 fish down on last year, although to be fair, the period they had their full complement of rods, conditions were not ideal. The rest of the season it was very lightly fished. That said they had some very big fish and some anglers had some good sport.
Andrew Cowan was on Dalni and Scaur on Monday 21st October and landed four fish all in double figures. He also lost a very strong fish after 20 minutes when it headed off downstream; it straightened his hook as he tried to turn it.
I fished the same beat on the last Saturday and landed a good double figure cock fish, then witnessed a run of fresh Grilse coming into Dalni and indeed managed to land one which was around 5lbs and was carrying sea lice.
The Club Water at Colmonell fared no better regarding numbers but did have one huge fish in the mid to high twenties caught just below the bridge by George Grimmison while fishing on a day ticket. This is a great bit of water which fishes very well in high water.
Upstream of the Bridge to the conflux of the Duisk and Stinchar was undoubtedly the place to be this season as Kirkhill, Bardrochat, Dalreoch, Almont and Hallowchapel all returned pretty much their usual average. However this is the part of the river which is certainly well fished with three of these beats operating syndicates.
On the Wee Stinchar catches were nothing like last season. Roger Pirrie had a great time on Laggansarroch last year but failed to land a single fish this season. His only action was on the last week when he lost a big fish in the Colonel’s Pool after 15 minutes.
Minuntion had a few, but finished with half of last season’s total.
Overall, this year’s season saw a decent run of big fish between May and July and indeed some of these early fish when caught were slightly coloured which suggests they may have entered the river as early as late March or April.
We then had a fairly good summer which resulted in angling coming to a standstill right up until the beginning of September. There was a reasonable number of fish caught during the next couple of weeks, but after that it was hard going apart from the odd day. It just seemed as if we were fishing over residents with very few fresh fish coming through.
Through the winter we will get a better idea of the number of fish in the system when we head out to catch up fish for the hatchery, weather permitting. We will also get the final count for this season’s returns, although I can never understand why it takes so long to produce the figures.
Thanks again to all the guys who kindly provide the information to enable me to provide these reports.
Hope you all winter well and have an enjoyable festive season.
Gordon

George Grimmison with his big fish from Colmonell Club Water