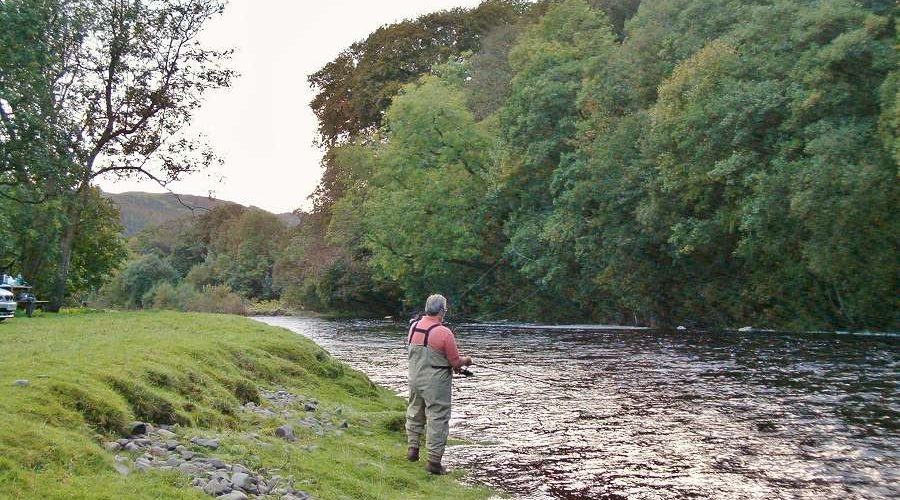 Despite the lack of water for most of the month the river continued to
fish well. At Ballantrae Bridge they had 58 for the month, with only the 2nd
week being a bit disappointing with only 4. Best week the last with 23. This
beat has continued to return around 60% of all fish landed.

All the way upstream the news is the same with all beats reporting lots
of fish in the pools and for those anglers fortunate enough to be on the
river after a rise in water have had some terrific sport. One regular rod on
Knockdolian landed 16 fish for 3 days.

At Colmonell the Kirkhill rods have being doing well with a good few fish
in double figures (all returned). This beat has been under the ownership of
Gilbert Brown since last season & if anyone wishes to enquire of
availability on this beat, Gilbert can be contacted on 078661661266.

On Bardrochat, Peter Trotman landed and returned a fish he thought to be
around the 18 lb mark. Up on Dalreoch David Tilsley had his best trip in
recent years landing 8 during his stay.

We are now into the final month and there seems to be no let up in the
number of fish still entering the river. Here’s hoping for a few more spates
to enjoy the remainder of the season.

As I write this report the river is at 4ft 8” at Colmonell Bridge after
the deluge on Saturday 18th August. Prospects for the coming week are
excellent, with the high water coinciding with high pressure by mid week and
most importantly lots of fish in the river.

The grilse arrived in numbers on the 8th August. The Mullhollands
(tenants on Ballantrae Bridge beat) started fishing on 6th August and saw
only a few fish, but by the Wednesday they were in every pool in good
numbers. This beat rotates top/bottom daily with the owners and between them
they landed 43 fish mostly around 5-7 lbs including 4 fish in double figures
– 80% of these fish were returned. Immediately upstream the syndicate rods
on Balnowlart had a bonanza but not until the next week starting the 13th
August. All regular rods had 2 or 3 fish but most notable on the 14th were
catches by Stuart Laing and Hugh McLatchie landing 15 fish between them of
which 12 were returned. It was the same story all up the river.

The small stretch of Kirkholm had 10 for the 13th and 14th with William
Marshall senior landing 4 himself. On Knockdolian despite not having every
beat fished they had their share of grilse and a good few double figure
fish.

The Club water at Colmonell has only had a few as has the new owner of
Kirkhill Fishings. Bardrochart, Dalreoch and Almont beats had 5 or 6 most
days the water was in order but no doubt they will welcome the new fish when
they arrive and perhaps sample the kind of fishing being had on the lower
river. Hallowchapel is the same, only a few in the book, but no doubt this
will change in the next few days as the fish progress upstream.

On the ‘Wee Stinchar’ at Minuntion a 17.5 lb fish was landed by John
Scobie from the Mill pool. Report of an 18lb fish from a farm stretch has
also been confirmed.

Given regular rainfall the Stinchar will have a lot of happy anglers by
it’s banks in the next couple of months.

While the summer has been a non event and other parts of the country are
deluged with rain the Stinchar has only had a number of little freshets. It
was during a little rise in late June Dr Swain’s party landed four salmon on
Knockdolian. Three of these fish were in double figures, the best at 16lbs.
There was also a report of a large fish from a private beat around the
Daljarrock Hotel area. Downstream on Balnowlart to date there have been four
fish landed.

There is quite a number of sea-trout being encountered which is very
encouraging, however the River Board would ask all anglers to return all
sea-trout to give these fish every chance to perhaps return to our river in
the numbers they once used to.

There has recently been a run of Sea Lampreys on
the river. These are interesting eel like creatures that cling to
other fish with their large mouth. If seen please notify the
Ayrshire Rivers Trust.The spring saw quite a good run on the river with large fish caught
on Dalreoch, Balnowlart and Minuntion. 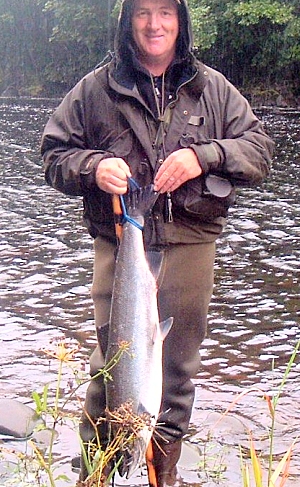 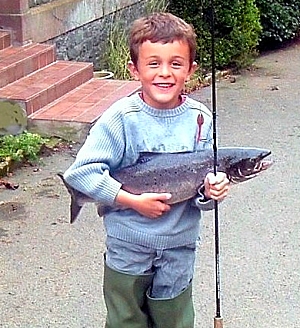 Approx 10,000 two month fed fry were stocked above the Stinchar falls.
The Forestry Commission have recently cleared
felled the south bank of the river above the falls and it was
decided to stock that area for the first time.There is a significant amount of good instream habitat in the
area.It is anticipated that the clearing of the trees will result in
a significant increase in instream productivity as the increased
light levels will encourage growth of instream algae and bankside
plants.Stocking in this part of the catchment should help to increase
salmon numbers in the upper Stinchar. 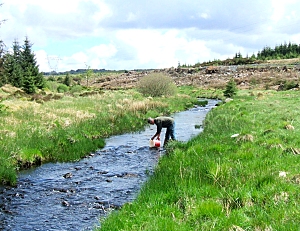 Stocking the river above Stinchar Falls

Although the numbers reared in the hatchery were down this year due to
difficulties in securing enough broodstock in the continual high water at
spawning time, the survival and growth rates in the hatchery have been very
good. The remaining fry will be stocked in the upper Balloch Burn. Ayrshire
Rivers Trust will monitor the success or otherwise of the stocking during
its comprehensive electro fishing survey of the river in the summer.